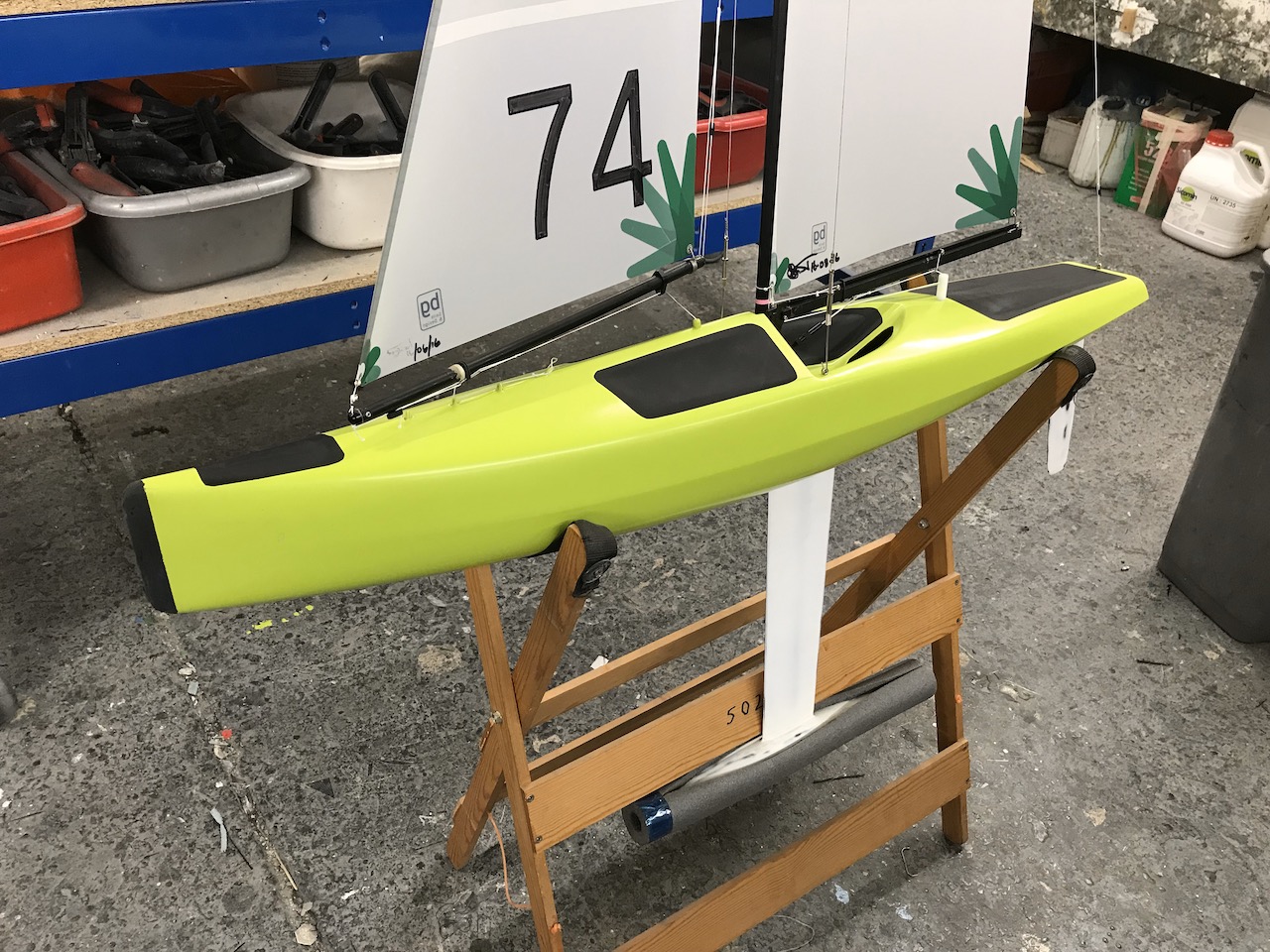 We’ve been tinkering with IOMs for years and done quite a lot of exploring around things. We’ve made narrow boats, not so narrow boats, low freeboard boats and all sorts

We like to arrive at our own conclusions and while the boats have ended up in a similar vein to the current crop of boats, we’ve got there organically and have a pretty good understanding of why they are the shape they are, and what that does for you.

The R9 was a bit of a random experiment with the deck shaping – it was also a trial in build method which I really wasn’t happy with so I never got as far as finishing it.

The R8 lost some of the V from the centreline over the R6 to try to get a bit more volume around the midsection of the boat to improve turning. It was a bit too wide in the stern, so it’s had a bit of a going over with the grinder to cut-and-shut it and seems to be behaving itself.

This is the first boat to feature my own design fin, bulb and rudder. The bulb is a very flat bottomed piece to get the c/g as low as possible.

The R7 only existed for a weeks worth of sailing. I was experimenting with a particularly narrow, ultra low wetted area shape and looking to solve a particular problem. It sort of worked, but was pretty hard to sail. It went in the bin to make way for the 8.

The R6 IOM is the current baseline boat as far as we’re concerned – it’s a pretty subtle V hull, of reasonable beam and pretty good wetted area. The downfall of the V hull is that it really doesn’t like turning all that much, but set it off in some open water and it’s a weapon.

The R5 was pretty good generally, if a bit sticky in the lighter airs – it currently resides in a buddies house in Southampton waiting for him to build some rigs and go sailing.

R2,3,4 and 5 in one shot. R2 is the only one that stood the test of time. It was pretty narrow by IOM standards, but as such was pretty easily driven. It ended up with quite a bit of freeboard up front to try to keep it from nosediving too much. 3 and 4 were pretty dreadful. I was trying to keep the bows a bit fine and ended up piling more volume above the waterline to keep them capable downwind, but the heeled upwind performance went out the window..

The R1 – Where it all started. I’d been sailing a Lintel for a season after getting back into radio sailing but just felt terrible that a boatbuilder hadn’t built his own boat. At this point I’ve never even thought about keelboat design and to be honest I still didn’t think about it too much. Just figured you’ve got to start with something. This approach is fine, as long as you keep your eyes open! It went in the bin.

You’ll notice a theme of boats going in the bin. I generally don’t like selling boats I consider to have flaws or vices – if one of mine comes up for sale, you can be pretty sure it’s going to be OK and all the stinkers have gone to valhalla.